The ‘Breakfast with…….’ interview series has gone from strength to strength since first launched last year with a constant stream of amazing guests. This week is no exception as my fabulous breakfast date is none other than Consumer Rights Lawyer Dean Dunham. 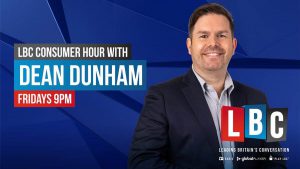 By trade Dean Dunham is a Barrister and Solicitor-advocate, specialising predominantly in consumer rights. However, he says he dedicates most of his time now ‘To the media, educating the nation on their consumer rights, highlighting and advising on topical consumer law issues, and taking firms to task when they flout consumer laws causing detriment to consumers.’

Dean writes for the Daily Express, Sunday People and Mirror online and presents the LBC Radio Consumer Hour every Friday at 9pm. He has also just launched a YouTube live stream where he answers consumer law questions every Monday at 8pm.

During his teenage years Dean was a competitive windsurfer and his first job was actually working at a watersports centre rather than anything related to his current profession. He says that his worst job was ‘In the warehouse of John Lewis over a Christmas period; it was freezing cold and really busy.’ I feel your pain there, Dean. Working in retail over Christmas is no picnic regardless of the weather.

The best parts of Dean’s job is that he gets to help ‘Tens of thousands of people every year with consumer law problems, often resulting in people getting their money back, or simply getting what they paid for.’ He says that now and then he makes ‘A real difference to someone who suffered significant detriment as the result of a trader’s actions’ and that this gives him a ‘Huge amount of satisfaction being able to make a difference to people.’

By contrast, Dean says ‘It is extremely frustrating when traders are not brought to task for flouting the law and causing consumer detriment.’ In some of these cases, no matter how much good advice he dispenses, there is nothing he can do to solve the issue, and these are the moments that he really does not enjoy. I agree Dean, there’s sometimes only so much you can do and it’s really disappointing when there’s no winning result for those you are trying to help. 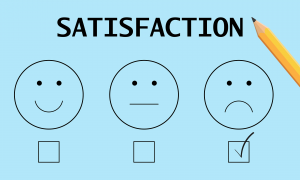 Over breakfast, Dean and I chatted about good customer service with his take on it being that ‘If a trader treats its customer well, it will generally enjoy loyalty from that customer and a low maintenance relationship. Customers who are treated badly can cause significant brand damage, especially with the emergence of online reviews, and can cost traders dearly with administrative time in responding to correspondence and defending court proceedings.’ Yes this has been particularly evident over the last pandemic year Dean with a number of companies failing to do the right thing by their customers potentially to their detriment.

Here are Dean’s 3 top tips for the best way that both traders and consumers can deal with complaints:

For a trader: 1) listen to your customers; 2) carry out a thorough investigation and do not be trigger happy with responses; and 3) make sure your customer service agents have a thorough understanding and appreciation of consumer laws

For a consumer: 1) Put your complaint in writing, providing a timeline of relevant events, clear description of your complaint, and supporting evidence; 2) understand and quote the applicable laws, ensuring you obtain this information from a reputable source/website; and 3) If your complaint is rejected, ask the trader if they are a member of an alternative dispute resolution (ADR) scheme.

The best advice Dean has ever given is regarding section 75 claims and is amazed that he tells consumers about it every week but ‘Many have never heard about it before despite the law being in place since 1974.’ Dean says this advice results in more success for consumers than any other advice he dispenses.

Finally on to real business, breakfast! Dean’s ideal breakfast guest is his wife. He says she is his best friend and biggest supporter and that he could not do all of the good work that he does for consumers without her. As a consumer law arbitrator, she also has a wealth of consumer law knowledge. Dean adds that having four children means that ‘They rarely get to eat breakfast at all, let alone together, as our house is a hive of activity in the mornings, as you can probably imagine!” Yes I think I have a quiet life in comparison with just privilegedpup and His Lordship to look after so really should be more productive and eat a decent breakfast. No excuses here.

In 5 year’s time Dean says he sees himself doing more of what he already does; ‘Helping consumers and being more involved in consumer law policy and law making’ so that he can ‘Make a real difference.’ I’m sure that will be the case Dean, your help has already proved invaluable to many and no doubt this will continue.

Thanks so much to Dean Dunham for being my breakfast guest today. You can find out more about Dean via his consumer website, catch him regularly on LBC and he’s also on Twitter and YouTube. 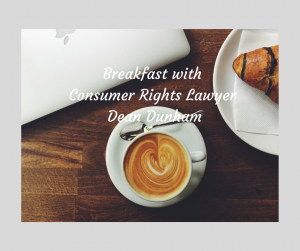