British Airways has had a rocky few years. Before Christmas it was counting the costs of a dispute with the pilots’ strike reportedly grounding 1700 flights and wiping around £80 million off its profits. This is in addition to previous data leaks affecting more than 550,000 passengers, an IT meltdown affecting 58 million and abysmal customer service experienced by passengers as a result of all of the above. Consequently, British Airways found itself ranked as the 55th favourite airline so nowhere near the top spot accolade of its glory days. You would hope that all this would serve to prove that you cannot treat people with such long term disdain as pure commodities without consequences. But no, with the announcement of 12,000 brutal job cuts, British Airways has clearly not learnt any lessons from its past. In fact the airline has by far excelled itself in its ability to stoop to the lowest of the low but this time has it gone too far?

Yes it seems undeniably so as since writing this initial post BA now intend to fire 42,000 only to reinstate surviving employees on new contracts with much reduced pay and conditions. Part of an all time master plan. Opportunism at the very least, despicable beyond belief at its worst.

“It’s not about the money. It’s about using this as an opportunity to make contractual changes.”

“Duty. Honour. Responsibility. Decency. Solid British Airways characteristics, or at least they used to be.”

“Morals? Decency? Respect? Only if there’s a profit to be made.”

The shocking news that British Airways was to axe 12,000 jobs came as a cruel kick in the stomach to all those affected and the emotional outpour from grief-stricken and soul destroyed crew who are experiencing ‘a cocktail of emotions’ has this week reduced me to tears. Even more upsetting is that this announcement came on the day ‘we were laying one of our colleagues to rest.’

The savage cull has been described by crew as a ‘COVID-19 manna from heaven’ for IAG and the BA board: ‘a once in a lifetime opportunity for the company to divest itself of its more expensive workforce’ in a decimation of current contracts under the cover of crisis. Devastated cabin crew warn that ‘Make no mistake. Henceforth, ALL British Airways employees will be working on minimum salary contracts, with little job security and the cheapest and worst working conditions legally allowable.’

‘It’s a gift horse not to be ignored. Equally, for BA to accept a very cheap government loan would open the door for Virgin, its most bitter of rivals, to do the same, thereby giving it the opportunity to find possible salvation. Walsh and Cruz have therefore concluded that, rather than give their UK opponents any chance of survival, it is preferable to throw their most loyal people to the wolves, and then replace them in a few years with far cheaper labour. Two birds with one stone. Job done! Management bonuses and Veuve Clique all round’ to blindly toast their own fabulous shallow success.

The feeling is very much that ‘British Airways Management’s brand is one of callous, deceptive, malicious, money-only-focused driven, two-faced, hard-nosed robots who care nothing for customers or crews – their loyalty is firmly and singly dedicated to shareholders profit and costs.’

With this in mind, it’s no wonder that loyal and disillusioned crew are now asking themselves ‘Who wants to work for a company that treats its employees with such disregard? Over the last 10 years we’ve seen this company that we’ve all put our heart and soul and passion and sweat into change so much for the worse.’ Employees are now ‘In one big boat fighting for our lives during the worst nightmare we’ve ever seen………..not in the name of survival but in the name of greed.’

This blog post has been put together in the words of BA crew themselves and my heart goes out to each and every one of those on the ground and in the air who are affected by these cuts. British Airways is a company that announced £19bn in liquidity to its stock market just 5 weeks ago, expected that they would see an upturn in business by the end of the year, has a sister airline which has just received €1 bn in a state backed loan yet won’t ask for one themselves and is still in negotiations to buy another airline.

The intention to tear up of contracts and execute 12,000 redundancies is at the very least unacceptable and indefensible and at the very worst vindictive, selfish and has created a climate of fear and insecurity, which is wholly unforgiveable. By all accounts this ‘Was the final act of brutality from a relationship’ that has turned from ‘happy, loving and fruitful’ in days gone by into one which is purely ‘toxic and abusive.’

Has British Airways this time gone too far? I’ll leave you to work that out for yourselves but this information taken from Flight Global might just help you decide.

British Airways – €1.921 BILLION profit in 2019 – 12,000 employees to be made redundant and those surviving the cull to have new contracts, working agreements, conditions and pay.

This video is a message to BA from its staff. We can but hope that it is heard. Please click here and watch. 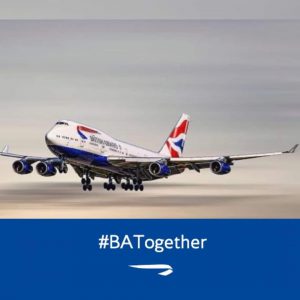