The following article has been contributed by Simon from Financial Expert. Simon has kindly agreed to pick apart his decision to recently take the bold step of selling his dream car. It has gone to a better place. Here he explains how and why. 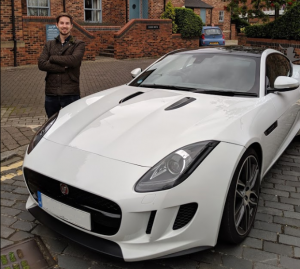 Why I bought my dream car

It was a thing of beauty.

As a car lover, I had spent several months avidly flicking onto Autotrader in my spare time to scan the whole country for a second hand Jaguar F-TYPE which met my exact specifications. Finally, an example sat in a dealership 200 miles away in Basingstoke had caught my eye.

I knew it was an expensive decision, even a stupid one perhaps. I appreciated that spending such a sum on a fast car so early in my life – before I’d even attempted to get a house – was sure to raise a few eyebrows.

Nevertheless, I went ahead with the purchase found myself the proud owner of something loud and fast.

‘If I had waited ten years time, petrol cars like this will probably be banned!’ was one of the few rationalisations I developed whilst driving over the years.

Why I sold my dream car

After two and a half years of whizzing about the country in the F-TYPE, I decided to sell it and go car-less while I enjoyed a semi-retirement.

It felt natural to save some money while my income stream was switched of. But as I did the sums, I realised that I hadn’t actually appreciated how much the car was actually costing me each year.

The depreciation was high, and we all appreciate that the costs of running any car soon add up. But what I was most interested to learn about were the hidden costs of a luxury car. The various ways in which a luxury car will eat away at your wallet without you noticing.

A thirsty engine and its fussy taste for premium fuel

Sports cars have larger engines which also burn more of the stuff. If my engine had an ordinary economy of 50 MPG instead of 30 MPG, I would have only used 600 litres. So that’s 400 litres or £500 wasted each year.

An expensive car, and one with higher performance will always attract a higher insurance premium.

I managed to find an excellent policy with Aon that capped the annual premium at £890 regardless of the value of the vehicle (though no Ferraris or Bugattis allowed!). This allowed me to avoid being hammered through a four-figure insurance premium.

As a driver with 10 years of no claims bonus, I would expect to be quoted £390 on an affordable car.

Jaguar Land Rover (JLR) dealerships charge the highest labour rates in the country – up to £150 per hour. They make lawyers look cheap!

This can make even routine tasks like running diagnostics a very expensive procedure.

Due to higher CO2 emissions, sports cars like the F-Type attract a higher road tax of £325.

Finding a puncture is the bane of motorists. However, even if you’re lucky and evade every nail – those tyres will still wear out eventually.

The cost of sports car tyres was the expense that I found most shocking. I expected to pay more for large tyres but I didn’t appreciate just how much more.

Economical tyres (right) are narrower, have a higher profile and are made from hard-wearing rubber compounds compared to sport car tyres (left).

Compared to normal tyres, the shoes for sports cars:

All of these factors explain why a budget tyre can be bought from Kwik Fit for £60, whereas a Pirrelli P-Zero Tyre for an F-Type can set you back £1,000 for a full set. 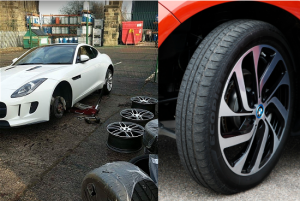 Calculating the total cost of ownership

All of these ‘hidden’ costs of owning a luxury or sports car total £1,857 per year. That’s enough on its own to lease a basic Vauxhall Corsa for a year!

This is before we factor in the ordinary running costs of the car and the depreciation.

The ordinary vehicle running costs such as standard fuel, cheap insurance and tax comes to a further £1,769.

And to think that some of these journeys were just a humble trip to Tesco to purchase a £60 weekly shop! It’s a staggering sum, and one that was easy to ignore because depreciation isn’t a cash cost – don’t see it leave the bank until you sell the vehicle and get out a calculator.

I had fun with the car and have many happy memories from the last two years. But when faced with the costs, it’s easy for me to begin to regret spending such a sum. I begin to wonder how I could have spent £10,000 per year differently.

However, that’s all in the past. A more positive way to frame this is to look at what impact I had by selling the car. I now know that I have saved myself £27.70 per day! Not a bad call.

How much does your car cost you?

As a thought experiment, why don’t you have a go at pricing up the full cost of your car? Have you ever considered whether using occasional taxis and public transport would save you money when all the hidden costs of vehicle ownership are taken into account?

Now, if you don’t mind, I believe I need to spend some time familiarising myself with the local bus timetable!

Simon contributes to Financial-Expert.co.uk, a site which delivers investing education to anyone who needs it, through free investing courses. Topics include how to buy shares and how to build an investment portfolio. Thank you to Simon for such an honest and insightful blog post. I’m off to find out how much my Mazda costs me!