4 Ways to Cope with the Fear of Flying

It is possible to get anxious about anything. Flying is one of those things. The fear of flight is known as aviophobia and defined as the extreme avoidance of planes or activities and places associated with them. A part of getting anxious is likely to be associated with the safety aspect of the flying. Companies, such as Jettly, who charter private jets, are helping anxiety sufferers by offering the opportunity to fly and associate in smaller groups. This article will explore some of the strategies that may help reduce anxiety on the day of your flight and curb the fear of flying.

Private jets are considered a safer and more relaxing way to fly for those who get anxious or who are in the public eye, because they avoid the necessity to associate with crowds. Passengers will board at separate terminals away from the main airport situation. The anxiety of waiting in a long queue to have yourself and your luggage checked is alleviated by being in just a small queue while waiting at your own private terminal. Then, once on the private jet, you will only be among those you booked the private jet for. In addition, private jets can fly higher than commercial airliners, avoiding most other air traffic and bad weather.

Seeing the Airport Beforehand to allay fear of flying

To get used to the environments that create anxiety in a situation, it can be a good idea to visit them first. That is, before the day of the activity that is likely to see someone anxious. To first get comfortable with an environment is half the battle to overcoming anxiety in relation to what happens there. So, if the airport is close to home, you could visit it on a day prior to your flight. Get used to any crowds, the sounds of the planes, and the uniforms that the staff wear.

There are numerous aircraft museums around the country. Visiting them can give you a love of aircraft as you find out about their fascinating histories. Cosford aircraft museum in Wolverhampton, England, for example, houses in one of its hangers an Avro Lincoln bomber that is said to be haunted. This potentially provides us with something more to worry about than flying. There may also be an air show going on. Acrobatic team, The Red Arrows, are famed for giving spectacular displays there and all over the world. You may learn interesting facts about them, such as, during a display the Red Arrows will use 450kg of fuel, twice that of the Chinook helicopter, or that they will reach speeds of 322 miles per hour. That during their flight, a Red Arrow pilot’s bodyweight will be six times greater than normal. This is the effect flying has on them. This could be likened to anxiety, as the pilot’s body is reacting to flying at high speeds and the forces associated with that. Pilots will train and become physically fit to combat the effects of g-force (gravitational force). Passengers on jets at least do not have to cope with that.

Flying can make you feel sick but there are medications that you can take to help relive this. Mediation in a liquid form is permitted on the plane if not more than 3.4 ounces in quantity. You should mention any medications when checking in. Doctors and pharmacists can advise on the types of medication to take.

Certain foods are known to reduce anxiety. For instance, the high level of selenium in brazil nuts has the potential to improve moods by reducing inflammation. This is likely to be at heightened levels when a person is experiencing anxiety. Fatty fishes eaten in moderation are thought to assist the cognitive function and mental health. This is due to them containing high levels of Omega-3. Fatty fishes include salmon, sardines, trout, and mackerel. Eggs contain tryptophan, an amino acid which creates serotonin, and serotonin helps regulate moods, sleep, behaviours, and memory.

You many find the attached article on eating to cope with situations, interesting to read. It relates to eating during moments of anxiety rather than ingesting the right foods beforehand as a preventative measure.

Other techniques for relaxing might include wearing comfortable clothing and breathing slowly and deeply. If none of these suppress your anxiety, there is also hypnotherapy to consider if you have a fear of flying.

So, a few strategies above that can help with a fear of flying. A big part of anxiety is the unpredictability of events and not knowing what will happen. This can be relieved by visiting places beforehand and developing a familiarity with the environments associated with anxiety. In addition, having medications to hand and thinking about what you are eating. 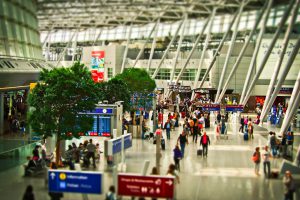 Please note that this is a contributed post. All views and opinions are not necessarily my own.