Could this year possibly get any better? My breakfast guest today is none other than Martyn James, Money and Consumer Rights Expert and Head of Media and Marketing for Resolver, the UK’s largest complaint handling and mediation service. 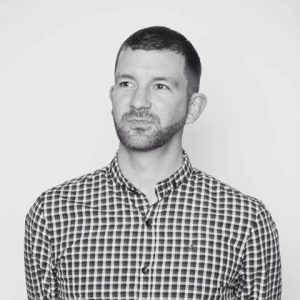 With two decades of experience, Martyn James ‘Provides media relations services for a range of free and ethical organisations’ and is the spokesperson for the website Resolver. In addition, Martyn is also a ‘Broadcast expert with over 2,000 appearances on TV and Radio!’ Wow, think I have a bit of catching up to do there and if this wasn’t impressive enough then Martyn is also currently the Headline Money, Expert of the Year, as voted for by the UK’s leading national journalists.’ He’s quite coy though admitting ‘I’m actually quite shy, believe it or not.’* Ha ha (just resisted temptation to write ‘lol’) it seems we may have a lot in common than just our interest in consumer rights!

I was keen to find out more about Resolver and Martyn was quick to oblige. The service was ‘Created by our founder James Walker, after he spent 9 months trying to sort out a problem with his boiler. He realised that businesses were sometimes so poor at sorting out complaints they took a simple issue and made it much, much worse.’ This is no surprise to me whatsoever as companies seem to spend more time digging themselves deeper into holes created then trying to avoid said holes in the first place.

Martyn went to explain that ‘Resolver was created to provide a one size fits all way for people to complain about any product or service. By making the process super simple (less clicks, more action!) and helping focus people’s minds about what it is they’re unhappy with, we make it much easier for businesses to understand what the problem is and what they need to do to sort things out quickly and effectively.’ Five years on and Resolver has helped to ‘Sort out over 5 million complaints and have 3 million individual users.’ Martyn is understandably ‘Hugely proud to have been a part of that.’ No wonder, it’s such an amazing achievement!

Martyn James is a fellow Northerner and grew up in Manchester. He was ‘An early starter working as a glass collector in a nightclub when I was, ahem, rather underage then, a barman. After University (Salford) where I studied performing arts, I worked as a professional dancer, turning professional shortly after my first year. I’ve also acted, trained in film-making and worked for 4 years in film production too!’ Seriously is there no end to this man’s talents? I’m also a keen thespian and lover of stage and screen. Maybe we could be the stars of the show together one day! #dreamteam

Martyn’s worst job was when he worked for a ‘Very large company in my mid-twenties that may or may not have been British Gas in their administration centre. Terrible wages, appalling targets and horrible, horrible executives. It taught me about how businesses view their customers behind the scenes and led me to focus on changing customer service for the better.’ This is very disappointing to hear but although it was an awful experience, I’m glad that it was a least the catalyst for the great work he does today.

As for the best parts of his current job, Martyn James works ‘With over 400 of the nationals leading print, online and broadcast journalists. The fact that my opinion and comments matter is like getting the Oscar for me. I am proud of the work I put in to the information I provide for the media, from detailed research to comment and analysis. And it can really make a difference. We’ve worked on campaigns that have changed industries for the better.’

The worst bits are ‘Always having to be on call. The news agenda doesn’t take days off or work 9-5. I have to be ready to help whenever I’m needed. Though again, I am secretly proud of that.’ I’m always happy to chip in too when called. Flexibility is at least one of the joys of being a freelancer. 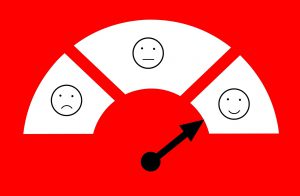 Just like moi, Martyn believes that ‘Good customer service isn’t just important, it’s everything. Businesses pay it lip service but the fact remains they put so many ‘blockers’ in place to shut off complaints, that you constantly have to be vigilant. The latest routine is pushing chatbots and removing email addresses – meaning people actually have to make written complaints and send them through the post! It’s nearly 2020.’ I couldn’t agree more, we need to move with the times not against them and make things easier not more difficult. Unfortunately ‘The more hoops people have to jump through, the less likely they are to complain.’ Martyn’s top tip when it comes to complaining would be to summarise any issues in a clear and straightforward manner by using bullet points for easy reference and also to save time as putting a complaint together can be quite time consuming. He would also advise stating exactly what you expect the company in question to do in order to resolve your issue.

Martyn also quite rightly states that ‘Astute business realises that people are getting much savvier and less loyal. Failure to listen means your customers will vote with your feet. Investment in customer services means they stay. It’s actually total economic sense to invest in good service. I wish more businesses would see that.’ So do I Martyn, so do I. Sneakily I did ask Martyn if he could name any companies who provide good or bad customer service but obviously he’s not allowed to comment in this respect as ‘Resolver isn’t able to name and shame businesses.’ Never mind, I’ll interrogate him over a glass of wine at some point instead.

In ten years time, Martyn would like ‘To be part of having led a revolution in customer service, so maybe helping businesses across all sectors be better at what they do. But also, I Iove to write. I have to put the creative work on the back burner – but I’d love to spend more time on the 7 unfinished books and scripts I’ve got lying around.’ I would really like to read some of your work Martyn, I enjoy writing too as you might have guessed. I also know a very good editor!

Last but not least breakfast! Apart from moi obviously, Martyn would like to have breakfast with ‘Wendy and Lisa (of Prince fame), Angela Carter and Nina Simone (if I could bring them back for one day) And Christine (and the Queens). I’m all about inspirational women.’ Oooh wonder if I am one of them? #lifegoals 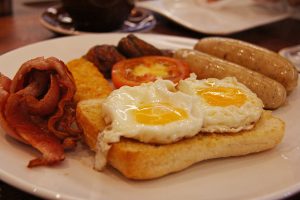 As for breakfast itself, Martyn is ‘Not a morning person! So, I usually skip it for an extra 17 minutes in bed. But when I’m up I’m a proud northerner so it would have to be the North West full English withs some Bury black pudding (then a little lie down after!)’ Hmm maybe we’ve found something that we don’t have in common, as I’m a real pain in the morning, full of the joys of spring! It’s later in the day that I run out of gas and flag quite spectacularly.

Many thanks to Martyn James for a fabulous breakfast chat. You can find him on Instagram and Twitter. I’d like to finish with the best advice he has ever been given which is ‘Who cares what other people think about you? Be yourself and don’t let anyone bring you down.’ Just brilliant!

Until next time, everyone. Cin cin! 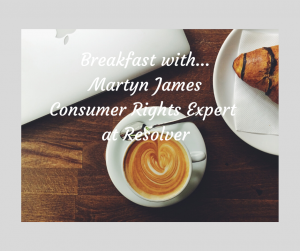